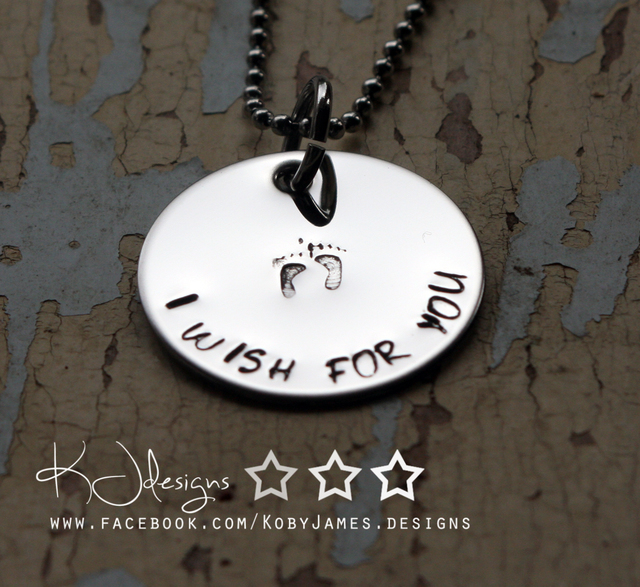 Well, time for another wee blog post from me.  I've been thinking a lot lately about ALL sorts of things.  I have a couple of new pendants to introduce to you ... but I'll share the story of why I made them first :)

One of them being how totally lucky I am to have given birth to 3 children.  I know one of them is not here with me, which makes me not so lucky.  But I know I am lucky that I have 2 beautiful children who woke up on Easter Morning. Even though it was 5am for one of them due to Daylight Savings ending ... I got cuddles and kisses and I'm tired, I have these 2 beautiful children here and living with me.

I am very lucky to have my Rainbow Baby.  I don't just have a story about baby - loss, I also have a story about infertility.  You see I was told before we got pregnant with Koby, our Angel Baby - that I would not conceive naturally.  I was 40 and my egg supply was low - the chance was around 1 % and in all reality that just would not happen.  At that time we decided that was ok, and we wouldn't keep trying.  Then I got pregnant.  If you've read my story before you know that pregnancy resulted in our beautiful baby Koby being born at 23+1 weeks, and us having to say goodbye to him.

Following our loss of Koby, I/we were desperate to have another baby - me more so.  However I was still over 40.  Over 41 by then.  Odds were even lower and when I visited the GP she didn't make me wait and 'try' the suggested amount of time, but immediately gave me a referral.  Because of my age, and the fact we had other children, we were not eligable for any funding.  Also because of my age the specialist suggested we do IUI rather than IVF as the odds for me of this working were around the same. As we were paying for it ourselves, IVF being around 3 times as expensive as IUI, we decided that would be the way to go.

I remember that first cycle so clearly.  So excited.  But so scared to get my hopes up.  After all the chances were still only around 5% that I would conceive.  Then there were other numbers that I knew, they had spelled it out to me, 50% chance of early loss in the first 12 weeks.  You are OVER 40.  Yes I know.  Please don't keep saying that.  Then of course a greater chance of a 2nd or 3rd trimester loss.... Yes - odds were against us.  But you have to have hope.  You have to put yourself out there, to get anything back.

A thing I'll let you in on - I am TERRIFIED of needles.  So this was a HUGE thing for me.  Daily blood tests, lots of them.  Then - I had to inject myself in the stomach.  That first injection - I sat there with the needle crying and shaking and too scared to do it, for about half an hour.  My husband then said he would do it ... That scared me more, so I eventually did it.  Evil.  But I did it.  Twice that cycle I think. They did get easier.  Though I did still cry sometimes.   More blood tests.  Then "D" day when hubby's 'swimmers' are inserted into me.  The first time with that was scarey as I didn't know what to expect.  Then two very long weeks of waiting.  Then second guessing every feeling, every thought ... Then ... disappointment.  Sadness.  Anger.  Resentment.  Then hope again as we decide to do 3 cycles.

And away we go again.  Hope. Disappointment.  Sadness.  Anger.  Resentment.  Followed by Hope.  2 more cycles.  The same.  Meeting again to discuss options.  Well there aren't really except to do more of the same.  This time, with our agreement we decide to increase the drugs and hope for more follicles - more chances.  3 more cycles.  We will do 6 in total.  That is all our finances will allow.

Hope.  Disappointment.  Sadness.  Anger.  Resentment.  Hope.  A couple of cycles I was late.  I 'FELT PREGNANT' - but I wasn't - what a cruel joke.

I spent the best part of 14 months (we missed quite a few cycles over Xmas, our wedding and other times for 'mental health' reasons) in this cycle of injections and needles and inseminations and hope followed by disappointment, anger, sadness and every emotion you can imagine.

When do you give up?  When do you admit that you are not going to get something you want so badly?  Something that it seems everyone and their dog can get, without even trying?  You wonder why the universe is so cruel to not allow you this one thing you want so badly.  You see babies and pregnant woman everywhere.  You already have a child, maybe you should just stop and be grateful for what you have.... This I heard quite a bit.  But I was so driven, after Koby, to hold my own baby and bring my own baby, alive and kicking into this world I couldn't see how I could stop trying.  Isn't stopping admitting defeat?

6 cycles.  Done and dusted.  The most you are medically allowed to do is 12.  We decided to do all 12.  Then we'd know we'd done all we could.  I started accupunture and chinese medicine.  I believed that this would help.  My accupunturist knew points going back centuries - he believed in what he did.  We were doing all we could.

Cycle no. 7.  My period arrived 3 days early.  It was like the universe laughing at me and kicking me in the guts.  A sign?  Were we just throwing money away that we didn't have.  All our savings had gone.  Perhaps we should stop.

I decided to take a month off TTC and resign from my job to do KJdesigns full time.  I couldn't cope with TTC, work and my business - something had to give and first it was my job.  At least I had KJdesigns which was my passion, my 'baby'.  I was unsure of my future, I couldn't form a mental picture of what it should be, I couldn't see a baby - but couldn't make myself envision my life without that hope.  Logic dictated we should give up.  The odds were so low - the specialist had said to us, we could do this 100 times and you'd still not get pregnant, or we could do this 1 time and you could.  And in the back of my mind I hung onto the 2nd part of that, and discarded everything else, including the niggling, even if you get the odds at 5% and get pregnant - and you are believing in 5% - how will you get past the 50% that you wont stay pregnant longer than 12 weeks.  Would all this be for nothing and we'd be grieving another baby?

My mind went over and over and round in circles.  Did all this mean we shouldn't open ourselves to that risk of such heartbreak again?  What should I do - I could do 5 more cycles ... I could.  I knew emotionally, if I didn't - I'd not be able to look back comfortably - I had to try.  But I needed a break.

In amongst all this angst, I'd finished work.... and got busy with my new work.  Suddenly I realised I was a few days late.

Have I told you my story about the pregnancy tests?  Well I will again ... I was scared of testing, cos I knew I wasn't - it would just be some evil fate laugh thing happening again, my body adjusting to the lack of drugs.  But I had to stop playing mind games, so needed that negative test to carry on.  I went into a different than usual supermarket (in case anyone saw me!)... as I was going in I looked to the skies, to Koby, and asked for a sign.  Nothing.  Big clear blue sky with nothing in it.  Not even a bird or a cloud... nothing I could even pretend was a sign.  I went in couldn't find any and came out again.  Stupid I thought, just go home.  Then as I came out, there was a massive bright rainbow up in the sky and I heard a voice in my head 'Mum making a rainbow takes time you know' .... And I knew.  I went to my usual supermarket, drove home, tested, and OMG we had made our own rainbow (and rainbows take time to make).  I was 42 with less than 1% chance of conceiving naturally ... and it happened!

I know everyone doesn't have this ending, and I'm so lucky I do.  I know I was very close to giving up.  But miracles do happen.  Sometimes.  And I got one.  I wish for everyone else out there TTC, that they may get a miracle too <3  But if they don't, I wish for them peace to accept the life they are forced to live.  I know the path to that peace is long and winding, and filled with lots of potholes, and I'm not too sure how far along that road  I had travelled before our miracle happened.