My name is Tracy and I’m a mum of eleven.

When I say that to people, you see their eyes go wide and they sort of start to stutter.  Then when you clarify that you have three living children, and eight angel babies it gets even worse!  Whether it be friends, family or strangers – miscarriage is still a taboo subject that people would prefer to ignore.

But as a Mum, I can’t ignore it.  I’ve been pregnant eleven times, and each were just as precious as the others.

It started in 2009 when I got married.  I was 36 years old, and we fell pregnant almost immediately.  Unfortunately within a few days of having it confirmed, we lost the baby.  To be honest, at that stage, I honestly didn’t know what to feel.  But within the month, we were pregnant again.  I had the sickness, the bloating, possibly the glowing effect before our 12 week scan.  Which resulted in no heartbeat.  My husband and I were devastated.  We’d followed all the rules.  No drinking, no sushi, no heavy lifting – it just didn’t make sense.  And then because my body refused to give it up, it resulted in a general anaesthetic, D&C and a sense of loss I’d never felt before.  Then you’re send home with nothing.  It happened a third time after this as well.

After another couple of months, we fell pregnant again.  This time we had nine months with no issues and baby Daniel was born at 42 weeks, all 9 ½ pound of him.  I was a mum!

Fast forward a year.  For some reason, my husband honestly just had to look at me and I fell pregnant.  We were lucky like that.  But unlucky that we couldn’t seem to hold onto the pregnancy past 16 weeks.  Three more miscarriages, three more D&C’s, three more losses followed.  Then Jayden arrived.  Again, a textbook pregnancy with no issues.  It just didn’t make sense.

By this stage we wanted answers.  Why did this keep happening to us?  All tests showed there was nothing wrong with either of us as we’d had two healthy children.  But what the tests did show is that all our losses were girls.   We still felt our family wasn’t complete……… so we tried again……. And again.  Two more losses.

By the end of the tenth pregnancy, I’d had enough.  I couldn’t cope with the mental anguish I put myself through, the failure that I felt as a female, wife and mother, and it was affecting my marriage and my boys.  So a decision was made for my husband to have a vasectomy.

I must admit, it was a huge relief knowing that we wouldn’t have to go through it all again.  And life carried on.  He got his two ‘all-clears’, we settled into family life, and then three months later I felt unwell.  Really unwell.  Familiarly unwell.  Yep – we were pregnant – again!

Tests showed that we were having a boy.  And Josh showed up healthy, well and screaming his lungs out.  Due to a low lying placenta, a C-Section was required so I asked the surgeon to tie my tubes while he was in there.  Down to the old saying “if you want something done properly, do it yourself”.

So, now I’m a mum to three living boys.  But I’ve never forgotten my angel babies.

Suz from KJdesigns came up with a gorgeous keepsake for me to remember them.  With a beautiful saying around the outside, and eleven dandelion seeds floating in the centre, my babies are with me all the time. 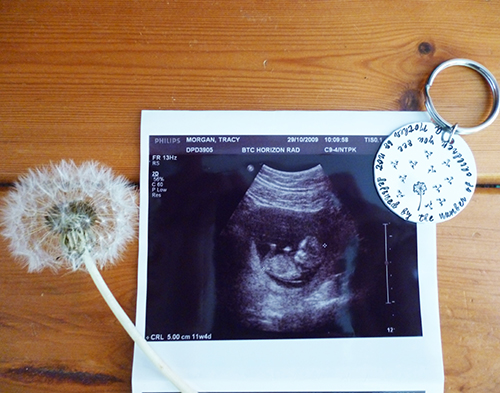