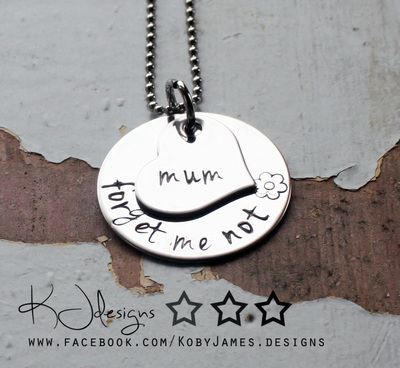 This is a different topic of post for me.  I've not posted about this before.

I've posted about my babies, and about my jewellery.  Well, now I'm going to do a post about my Mum.  She is only young, in her 60's.  She's had a few memory problems over the years.  Writes everything down.  Several times sometimes.  Crosses things off as they happen.  Forgets what day it is.  Forgets how to tune the TV.  Late last year she forgot where she parked her car.  Gosh I've done that before!  She lost her wallet/handbag.  Twice in a few months.  Put it on the car and drove off.  She's had 'tests' and they've said it was just age related stuff.

Late last year there was the dentist.  Lots of stress over a procedure.  Financial stress also.  Confusion about what was happening.  Doing the same thing twice.  Three times.  Going in to pay, when she had already paid.  Losing credit cards.  Cutting up the new credit card cos she thought it was the lost one turned up.  Blamed it all on stress, once the dentist drama was over, it would all be fine again.

Diagnosis .... of losing yourself.  Losing yourself within yourself.  She got that diagnosis on 14/01/14.  The very same day my rainbow baby was born.  In fact she came straight from the Specialist after receiving that news, to visiting me and meeting her new grandson.  She didn't tell me.  I didn't know.  For a few days.  Then shock.  Sadness.  Very scared.  Denial.  Anger.  Disbelief.  More Anger.  She was going to lose herself.  But still be here.  For a while.  She wouldn't know who we were.  Wouldn't know her grandchildren.  And SHE KNOWS ITS HAPPENING.  She knows its going to happen.  She knows she is going to slowly lose her awareness of who she is.  I cant get my head around that.

After the diagnosis, and with my newborn, lack of sleep, lots of different emotions for me as well ... life did seem to return to 'normal' for a while.  Then, very quickly it seemed, she would visit.  Then not remember how to get home.  The place where she had lived independently for 20 odd years.  She wasn't eating.  Loss of appetite is common.  She couldnt remember how to cook.  How to make a cup of tea.  So she didnt.  She didnt remember she didnt.  She kept getting lost.  It was very stressful for her.  She was very scared at what was happening.  It seemed to be happening so fast ... after creeping up on us ... DEMENTIA was here.  She had to stop driving.  Very difficult when you live 17kms out in the country by yourself.

Time to make the hard decisions.  Alot of family discussions.  Disagreements.  Specialists recommended Rest Home care.  SHE IS IN HER 60's!!!  Its SO NOT FAIR I wanted to scream.  I want my MUM!!!  Eventually Acceptance again.  She accepted it.  She was scared to go home.

But.  She is losing herself.  We have the same conversation.  Quite alot.  Its new to her.  But not to me.  She is trying to 'live in the moment', but sometimes its all too much and too scarey.  I am trying to do that too.  Sometimes its too hard to think too far in the future.  We do alot of 'baby therapy'.  She loves that boy.  I do too.  He is a delight.  He is what is making both our lives - have light in  ... and my 10 year old of course.  But in particular, the little rainbow, continued delight.  Continued hope.  We will create memories, even if they are only there for a short time.  We will still create them.  We will have happiness and love in the moment.  And repeat as necessary.  We will be there.  Be present.  Even when she is lost.  Even though I cant bear to think of that.  We will be there.

So ... I am trying to raise awareness (and hopefully a little bit of money)... it is Alzheimers (Dementia) Awareness Month.  I've designed a little necklace, and for every one I sell, I'll be donating $10 to Alzheimers NZ.